The Japanese don’t sleep. This is what everyone – the Japanese above all – say. It’s not true, of course. But as a cultural and sociological statement, it is very interesting.

I first encountered these intriguing attitudes to sleep during my first stay in Japan in the late 1980s. At that time Japan was at the peak of what became known as the Bubble Economy, a phase of extraordinary speculative boom. Daily life was correspondingly hectic.

People filled their schedules with work and leisure appointments, and had hardly any time to sleep. The lifestyle of this era is aptly summed up by a wildly popular advertising slogan of the time, extolling the benefits of an energy drink. “Can you battle through 24 hours? / Businessman! Businessman! Japanese businessman!”

Many voiced the complaint: “We Japanese are crazy to work so much!” But in these complaints one detected a sense of pride at being more diligent and therefore morally superior to the rest of humanity. Yet, at the same time, I observed countless people dozing on underground trains during my daily commute. Some even slept while standing up, and no one appeared to be at all surprised by this. 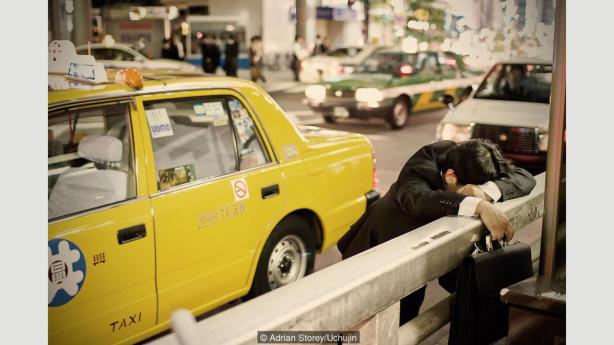 I found this attitude contradictory. The positive image of the worker bee, who cuts back on sleep at night and frowns on sleeping late in the morning, seemed to be accompanied by an extensive tolerance of so-called ‘inemuri’ – napping on public transportation and during work meetings, classes and lectures. Women, men and children apparently had little inhibition about falling asleep when and wherever they felt like doing so.

If sleeping in a bed or a futon was considered a sign of laziness, then why wasn’t sleeping during an event or even at work considered an even greater expression of indolence? What sense did it make to allow children to stay up late at night to study if it meant that they would fall asleep during class the next day? These impressions and apparent contradictions led to my more intensive involvement with the theme of sleep for my PhD project several years later.

Initially, I had to fight against prejudice as people were reluctant to consider sleep a serious topic for academic enquiry. Of course, it was precisely such attitudes that had originally caught my attention. Sleep can be loaded with a variety of meanings and ideologies; analysing sleep arrangements and the discourse on it reveals attitudes and values embedded in the contexts in which sleep is organised and discussed. In my experience, it is the everyday and seemingly natural events upon which people generally do not reflect that reveal essential structures and values of a society. 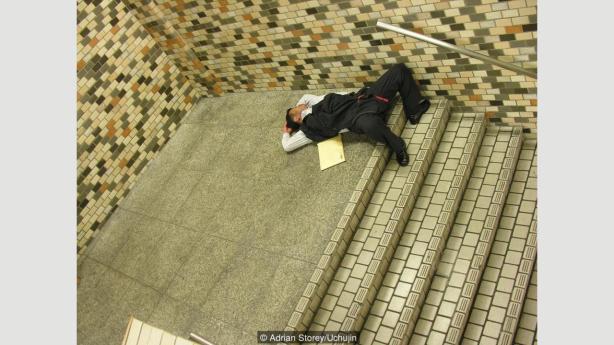 We often assume that our ancestors went to bed ‘naturally’ when darkness fell and rose with the Sun. However, sleep times have never been such a simple matter, whether in Japan or elsewhere. Even before the invention of electric light, the documentary evidence shows that people were scolded for staying up late at night for chatting, drinking and other forms of pleasure. However, scholars – particularly young samurai – were considered highly virtuous if they interrupted their sleep to study, even though this practice may not have been very efficient as it required oil for their lamps and often resulted in them falling asleep during lectures.

Napping is hardly ever discussed in historical sources and seems to have been widely taken for granted. Falling asleep in public tends to be only mentioned when the nap is the source for a funny anecdote, such as when someone joins in with the wrong song at a ceremony, unaware that they have slept through most of it. People also seem to have enjoyed playing tricks on friends who had involuntarily dozed off.

Early rising, on the other hand, has clearly been promoted as a virtue, at least since the introduction of Confucianism and Buddhism. In antiquity, sources show a special concern for the work schedule of civil servants, but from the Middle Ages onwards, early rising was applied to all strata of society, with “going to bed late and rising early” used as a metaphor to describe a virtuous person.

Another interesting issue is co-sleeping. In Britain, parents are often told they should provide even babies with a separate room so that they can learn to be independent sleepers, thus establishing a regular sleep schedule. In Japan, by contrast, parents and doctors are adamant that co-sleeping with children until they are at least at school age will reassure them and help them develop into independent and socially stable adults. 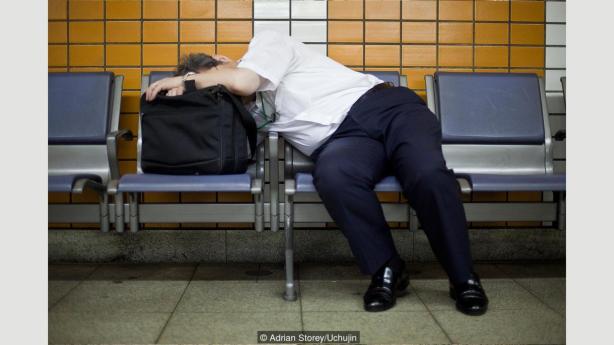 Maybe this cultural norm helps Japanese people to sleep in the presence of others, even when they are adults – many Japanese say they often sleep better in company than alone. Such an effect could be observed in spring 2011 after the huge tsunami disaster destroyed several coastal towns. Survivors had to stay in evacuation shelters, where dozens or even hundreds of people shared the same living and sleeping space. Notwithstanding various conflicts and problems, survivors described how sharing a communal sleeping space provided some comfort and helped them to relax and regain their sleep rhythm.

However, this experience of sleeping in the presence of others as children is not sufficient on its own to explain the widespread tolerance of inemuri, especially at school and in the workplace. After some years of investigating this subject, I finally realised that on a certain level, inemuri is not considered sleep at all. Not only is it seen as being different from night-time sleep in bed, it is also viewed differently from taking an afternoon nap or power nap.

How can we make sense of this? The clue lies in the term itself, which is composed of two Chinese characters. ‘I’ which means ‘to be present’ in a situation that is not sleep and ‘nemuri’ which means ‘sleep’. Erving Goffman’s concept of “involvement within social situations” is useful I think in helping us grasp the social significance of inemuri and the rules surrounding it. Through our body language and verbal expressions we are involved to some extent in every situation in which we are present. We do, however, have the capacity to divide our attention into dominant and subordinate involvement.

In this context, inemuri can be seen as a subordinate involvement which can be indulged in as long as it does not disturb the social situation at hand – similar to daydreaming. Even though the sleeper might be mentally ‘away’, they have to be able to return to the social situation at hand when active contribution is required. They also have to maintain the impression of fitting in with the dominant involvement by means of body posture, body language, dress code and the like. 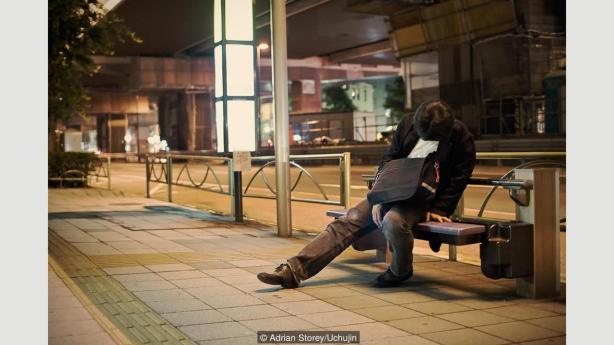 Inemuri in the workplace is a case in point. In principle, attentiveness and active participation are expected at work, and falling asleep creates the impression of lethargy and that a person is shirking their duties. However, it is also viewed as the result of work-related exhaustion. It may be excused by the fact that meetings are usually long and often involve simply listening to the chair’s reports. The effort made to attend is often valued more than what is actually achieved. As one informant told me: “We Japanese have the Olympic spirit – participating is what counts.”

Diligence, which is expressed by working long hours and giving one’s all, is highly valued as a positive moral trait in Japan. Someone who makes the effort to participate in a meeting despite being exhausted or ill demonstrates diligence, a sense of responsibility and their willingness to make a sacrifice. By overcoming physical weaknesses and needs, a person becomes morally and mentally fortified and is filled with positive energy. Such a person is considered reliable and will be promoted. If, in the end, they succumb to sleep due to exhaustion or a cold or another health problem, they can be excused and an “attack of the sleep demon” can be held responsible.

Moreover, modesty is also a highly valued virtue. Therefore, it is not possible to boast about one’s own diligence – and this creates the need for subtle methods to achieve social recognition. Since tiredness and illness are often viewed as the result of previous work efforts and diligence, inemuri – or even feigning inemuri by closing one’s eyes – can be employed as a sign that a person has been working hard but still has the strength and moral virtue necessary to keep themselves and their feelings under control.

Thus, the Japanese habit of inemuri does not necessarily reveal a tendency towards laziness. Instead, it is an informal feature of Japanese social life intended to ensure the performance of regular duties by offering a way of being temporarily ‘away’ within these duties. And so it is clear: the Japanese don’t sleep. They don’t nap. They do inemuri. It could not be more different.